A Look into Miami’s News Ecosystem: Construction and Collaboration 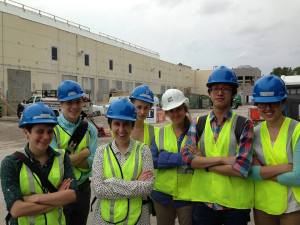 The inaugural class of Google Journalism Fellows in Miami.

As part of my Google Journalism Fellowship, I had the good fortune to spend a week in Miami, delving into the city’s news ecosystem. From visits to a wide spectrum of media outlets and conversations with A-listers in journalism research, it’s clear that the city’s news ecosystem is truly under reconstruction (as CW Anderson also discovered in his Philadelphia case study, Rebuilding the News) – both physically and intellectually.

Several news outlets in Miami have built brand new, digital-first newsrooms. The Miami Herald, which recently vacated its iconic offices overlooking Biscayune Bay, now resides within a redesigned warehouse in Doral – a 15-minute drive from Downtown Miami. While the move to the city’s outskirts was largely financial, rebuilding its newsroom forced The Herald to reconstruct physical spaces within the newsroom to maximize collaboration. Editorial meetings, for instance, are held in the open at a long, communal table in the center of the newsroom. This layout fosters deeper engagement between editors and reporters. In addition, The Herald has redesigned its “Continuous News Desk,” placing social media editors right alongside those working on the print edition. The paper calls the setup, “an air traffic control tower for news, information, photos and videos.”

A few blocks away, Fusion – the forthcoming cable channel collaboration between ABC News and Univision – now stands as a construction site. Currently, one must wear a hardhat, reflective vest and steel-toed boots to enter the newsroom. Fusion’s facility – also a converted warehouse in Doral – has only four offices for senior leadership. All other employees – from vice presidents to interns – will work in a cubicle-less, open design newsroom, forcing collaboration. Similarly, WRLN, the city’s NPR affiliate, will soon move into renovated facilities, expanding its staff.

Such capital investments in brick-and-mortar news facilities may seem risky, particularly at such a time of industry upheaval. But this notion of betting heavily on journalism’s future may be influenced by the city’s vibrant journalism startup scene. Throughout the week, we also chatted with ambitious news entrepreneurs (like the leaders of Gui.de, which converts journalistic text to avatar-driven videos) who self-identify as “disruptors” of journalistic practice. The city’s burgeoning high tech scene, then, appears to be acting as a catalyst for incumbent, legacy players to retool, rethink and physically reconstruct their news presence in the city.

So what will Miami’s next generation of journalism — driven by the city’s nimble startup culture — resemble? At a conceptual level, many thought leaders and experts in the city answered with two words: design thinking. Importing the IDEO-born principles of human-centered design may lead news executives to think more about the end user’s experience, experts in the city say. But at a more practical level, news leaders suggest that on-the-ground journalists can start by connecting more deeply with targeted communities. In a sense, it’s almost a return to the hyperlocal craze of the early 2000s, in which backyard news was crafted toward niche groups of users.

And news leaders say that the next generation will be driven by increased content sharing between news organizations, which begs the question: How will this reconstruction impact the news consumer? For now, it’s very much a work in progress.