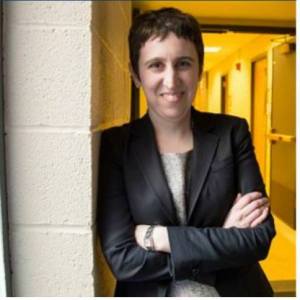 Jan Lauren Boyles is an associate professor and director of graduate education at Iowa State University. Jan joined Iowa State from the Pew Research Center in Washington, where she collaborated with staff as a research associate for the Journalism Project (formerly the Project for Excellence in Journalism). Her research centers on the data-driven newsroom. She received her PhD from American University’s School of Communication in May 2014. Her dissertation encompassed a case study of the New Orleans news ecosystem.

Boyles has presented her work before the International Communication Association, the Massachusetts Institute of Technology and University of Oxford’s Reuters Institute for the Study of Journalism, among others. Her manuscripts have been published in Journalism Studies, Newspaper Research Journal and Digital Journalism as well as Media, Culture & Society and Journalism: Theory, Practice & Criticism. Boyles also served on a research task force at the Federal Communications Commission — a project examining critical information needs for 21st century citizens. From 2012-2014, she collaborated with experts at the Pew Research Center, where she co-authored multiple reports on mobile technology and news consumption.

As an academic, Boyles has received several industry fellowships. In 2016, she was selected by AEJMC as a Scripps Howard Visiting Professor in Journalism, spending two weeks in residence at The Post and Courier in Charleston, South Carolina. In 2017, she has been selected as a Disruptive Educator Fellow by the Tow-Knight Center for Entrepreneurial Journalism. In 2019, she was selected as a Big XII Faculty Fellow for research collaborations at the University of Kansas.

An award-winning instructor and academic advisor at West Virginia University, Boyles taught courses in media ethics, reporting, narrative journalism and news writing. She was honored as the inaugural recipient of the University’s Nicholas Evans Award for Academic Advising. In 2017, Boyles received the Harry Heath Advising Award from Iowa State. In 2018, she received the College of Liberal Arts & Sciences Award for Outstanding Early Achievement in Teaching from Iowa State.

In university service, Boyles was an elected member of the University’s Faculty Senate, and served a term on the body’s Executive Committee at West Virginia University. She also was appointed to the institution’s 2020 Strategic Planning Council. She has continued this record of service at Iowa State, where she was elected to the University’s Faculty Senate in 2015, and re-elected to a second term in 2018. She also has served on the College’s Strategic Planning team and Iowa State’s Governance Council. In 2017-2018, Boyles served as the chair for AEJMC’s Newspaper and Online News Division — an organization of 375 faculty members in journalism studies. She currently serves on an AEJMC presidential task force on professional development.

Beyond academic and professional work, Jan is a diehard fan of the Pittsburgh Pirates and “Doctor Who.”